Page 18 opinion piece.  Link to the full Advertiser on-line version, or copy below.  The Advertiser print version omitted the sections on “creationism” and 2016 Census.  The cartoon by Keenan was also no run — his illustration is included here. 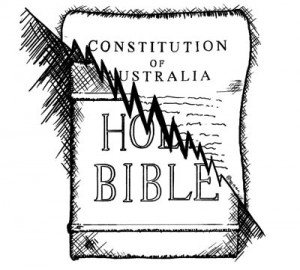 Adrenaline trigger-words — fire, shark, snake — tend to spark our primal “fight or flight” response.  Incredibly, for some Christians, a similar reaction is stirred by the word “atheist”.  Children continue to be taught that atheism is immoral, and it’s acceptable to demonise those who don’t share your own religious beliefs.

The word itself is misunderstood.  ‘A-theism’ means nothing more than absence of belief in any God.  Choosing not to worship a supernatural entity is the right of every citizen, in exactly the same way that the faithful have a constitutional right to “freedom of religion”.

There’s a common myth that atheism itself is a religion.  Rebuttals to this hoary old chestnut are numerous, but some of the most amusing I’ve heard are; “atheism is a religion, just like not collecting stamps is a hobby; that OFF is a TV channel; and bald is a hair colour”.

Another recurring myth tries to link atheism with dictators like Hitler, Stalin and Pol Pot.  In the same way that atheism is ‘a-religious’, so too is it ‘a-political’ — it has nothing to do with Communism and Nazism.  No war in history was ever fought under the banner of atheism; unlike many regimes that still claim to have a God on their side.

Christians, too, seem obsessed with the view that atheists are out to destroy religion. The reality is that atheists wish to see an end to global sectarian violence, and for governments to become less influenced by churches on social legislation.  But the inescapable truth is that many forms of religion will continue for generations to come.

Since the time when modern humans had refined speech and language — around 150,000 years ago — we’ve been programmed to obey authority.  Children learned to obey parents and elders without question, primarily as a survival tool in an extremely harsh and hostile environment.

Belief in a supernatural God was an inevitable step; it served as a means to allay fear of violent storms, earthquakes, and the sheer terror of a solar eclipse.  Without today’s scientific knowledge it’s easy to imagine the extreme fear that early humans must have felt.

Over that long period — and in every country on Earth — various cultures have worshipped thousands of different Gods.  We still do.  Children are taught to accept the God of their parents, and to be “atheist” to all other Gods.  Atheists simply go that one step further and reject one extra God.  If the others can’t be true, nor can this!

So what’s the purpose of atheism?  Our primary aim is to see Australia become a truly ‘secular’ democracy.  That means separating organised religion from the affairs of state.  For centuries, religious dogma has dominated government, society and the political process.  Questioning church authority was taboo, and blasphemy punishable by death.  Sadly, in some cultures that remains true today.

Perhaps the greatest travesty is the claim, by those of faith, that society will crumble without biblical morality.  This is plainly dishonest. The Old Testament condones slavery, rape and death for trivial deeds, while the New Testament borrows heavily from more ethically sophisticated cultures of the time, such as Greece.

Modern secular ethics have evolved far beyond the brutality of Genesis and modest amendments of the New Testament.  Australia needs to teach schoolchildren secular ethics, not texts from an ancient manuscript.

A majority of western countries are now secular, with Scandinavia ranking highest for atheism and non-belief.  The 2011 Australian census showed 22.3% of citizens had “no religion”; in New Zealand it’s closer to 40% — due mainly to the “no religion” option being placed first in their census, rather than last, as is the case in Australia.

However, anecdotal information (over decades) shows at least another 30% have only a “cultural” association with the religion they were taught as a child — even though it’s a belief they have neither held nor practiced.

The national census perpetuates this distorted data.  Currently, the question on religion asks “What is the person’s religion?”, wrongly assuming we all have one.  A campaign to change the 2016 census question to “Does the person believe in, and practice, a specific religion?” aims to produce far more accurate figures.

So, what’s the big deal?  Why the need to give atheism a voice?

Over the past 10 years the rise in religious fundamentalism means that 1 in 4 Australians believe in the literal truth of Genesis — a 6,000 year old Earth and the fiction of Noah’s flood.  Any science which disproves that belief is seen as a hoax.  Worse still, creationists believe in the End-Times and are convinced that trying to save the planet is futile.

This ‘Young Earth Creationism’ is presented as fact by a swathe of evangelical churches, including the Rundle Mall Street Preachers.  Several state and federal MPs also believe these Bronze Age myths.  It not only undermines developments in modern science but distorts and derails progress on a host of contemporary social policy in Australia today.

Current issues include marriage equality; replacing the Chaplaincy Program with qualified secular counselors; and voluntary euthanasia — which is supported by 76% of Australians.  And we must stop teaching “Young Earth” creationism to schoolchildren.

These debates, over many years, have been dominated by a variety of church lobbies.

Andrew Dutney, Professor of Theology at Flinders University, stated recently, “…Christian churches have not been very tolerant of minority voices so they have used their size and influence to take up all the air time.”

Rather than a “minority”, secularists are really the silent majority.  We wish to “balance” the public debate on all contemporary social issues.  Religion itself must be open to challenge — especially fundamentalist organisations that continue to indoctrinate schoolchildren with myths that humans walked with dinosaurs, only 6,000 years ago.

We need to meet the challenges of the 21st century with reason and logic rather than public dependence on religious doctrine and the supernatural, which only impedes social and scientific progress.

Society can only benefit from embracing the broader world view of secularism and humanism.  This would eventually allow Australia to mirror the more dynamic and progressive cultures of western Europe.